November 19, 2018
nicknamed "The Golden city", is a city in the Indian state of Rajasthan, located 575 kilometres (357 mi) west of the state capital Jaipur. Once known as Jaisalmer state it is a World Heritage Site. The town stands on a ridge of yellowish sandstone, and is crowned by the ancient Jaisalmer Fort. This fort contains a royal palace and several ornate Jain temples. Many of the houses and temples of both the fort, and of the town below, are built of finely sculptured sandstone. The town lies in the heart of the Thar Desert (the Great Indian Desert) and has a total population, including the residents of the fort, of about 78,000. It is the administrative headquarters of Jaisalmer District. 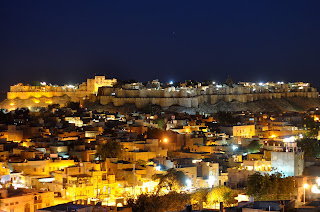 Jaisalmer is named after the Maharawal, Jaisal Singh, a Rajput king who founded the city in 1156 AD. "Jaisalmer" means "the Hill Fort of Jaisal". Jaisalmer is sometimes called the "Golden City of India" because the yellow sandstone used throughout the architecture of both the fort and the town below, imbues both with a certain golden-yellow light.

Sand dunes near Jaisalmer.
Jaisalmer, being an arid desert region, is prone to extremes in terms of temperature. The temperature varies greatly from day to night in both summer and winter. The maximum summer temperature is around 49 °C (120 °F) while the minimum is 25 °C (77 °F). The maximum winter temperature is usually around 23.6 °C (74.5 °F) and the minimum is 5 °C (41 °F). The average rainfall is 209.5 millimeter (8.25 in). Highest ever recorded temperature was 50.0 °C (122.0 °F);the lowest ever recorded temperature being −5.9 °C (21.4 °F). Temperatures of up to 52.4 °C (126.3 °F) have been recorded near the international border close to Pakistan, but standard conditions of this temperature recording remain unverified.
Water is scarce, and generally brackish; the average depth of the wells is said to be about 250 feet (76 m). There are no perennial streams, and only one small river, the Kakni, which, after flowing a distance of 48 kilometres (30 mi), spreads over a large surface of flat ground, and forms Lake Orjhil ("The Bhuj-Jhil"). The climate is dry. Throughout Jaisalmer only rain crops, such as bajra, jawar, motif, til, etc., are grown; spring crops of wheat, barley, etc., are very rare.

Bada Bagh and windmill farms of Jaisalmer
Tourism is a major industry in Jaisalmer.
The Government of India initiated departmental exploration for oil in 1955–56 in the Jaisalmer area. Oil India Limited discovered natural gas in 1988 in the Jaisalmer basin.
Musicians and dancers are also a major cultural export from Jaisalmer to the rest of the world. Merasi (formerly Manganiyar, a derogatory term meaning "beggar") musicians have played the world over, and Queen Harish, the dancing desert drag queen, is touring the world and has featured in international movies.
Jaisalmer is also known for its leather messenger bags, made from wild camels native to the area.

Jaisalmer is connected to the rest of Rajasthan by buses provided by Rajasthan State Transport Corporation as well as other private bus operators. The airport was inactive but Spice Jet has now started flight from Delhi and Mumbai since 29 October 2017. Jaisalmer railway station runs daily trains between Jaisalmer and Jaipur, through which it is connected to Delhi and other cities all over India. This station comes under NWR zone and JU division. Additionally, there exists a luxury tourist train known as Palace On Wheels, which covers the major tourist destinations of Rajasthan, including Jaisalmer. The main occupation of people of Jaisalmer is farming. Many people also work as drivers and cab owners who provide transportation to tourists.
desert desertcamp jaisalmer
Location: Jaisalmer, Rajasthan 345001, India